Posted on February 21, 2013 by tabardinnadmin

THE TRANSFORMERS SPOTLIGHT:  MEGATRON:  I usually don’t enjoy the Spotlight issues, mostly because they take place in the past, and they try to explain something that doesn’t need explaining.  Not this one.  This one takes place right after Megatron wakes up.  Here we have Megatron vs. Starscream in a way we’ve never seen before.  Usually, Starscream is about self-preservation.  Now, he actually wants Megatron to end his existence.  Everything Starscream has been working toward since the war ended has been taken from him, and he just wants it all to end.  And in an odd moment of introspection, Megatron finally reveals why he keeps such a treacherous swine like Starscream around.  This is an amazing issue, and if you love Transformers, you can’t miss it. 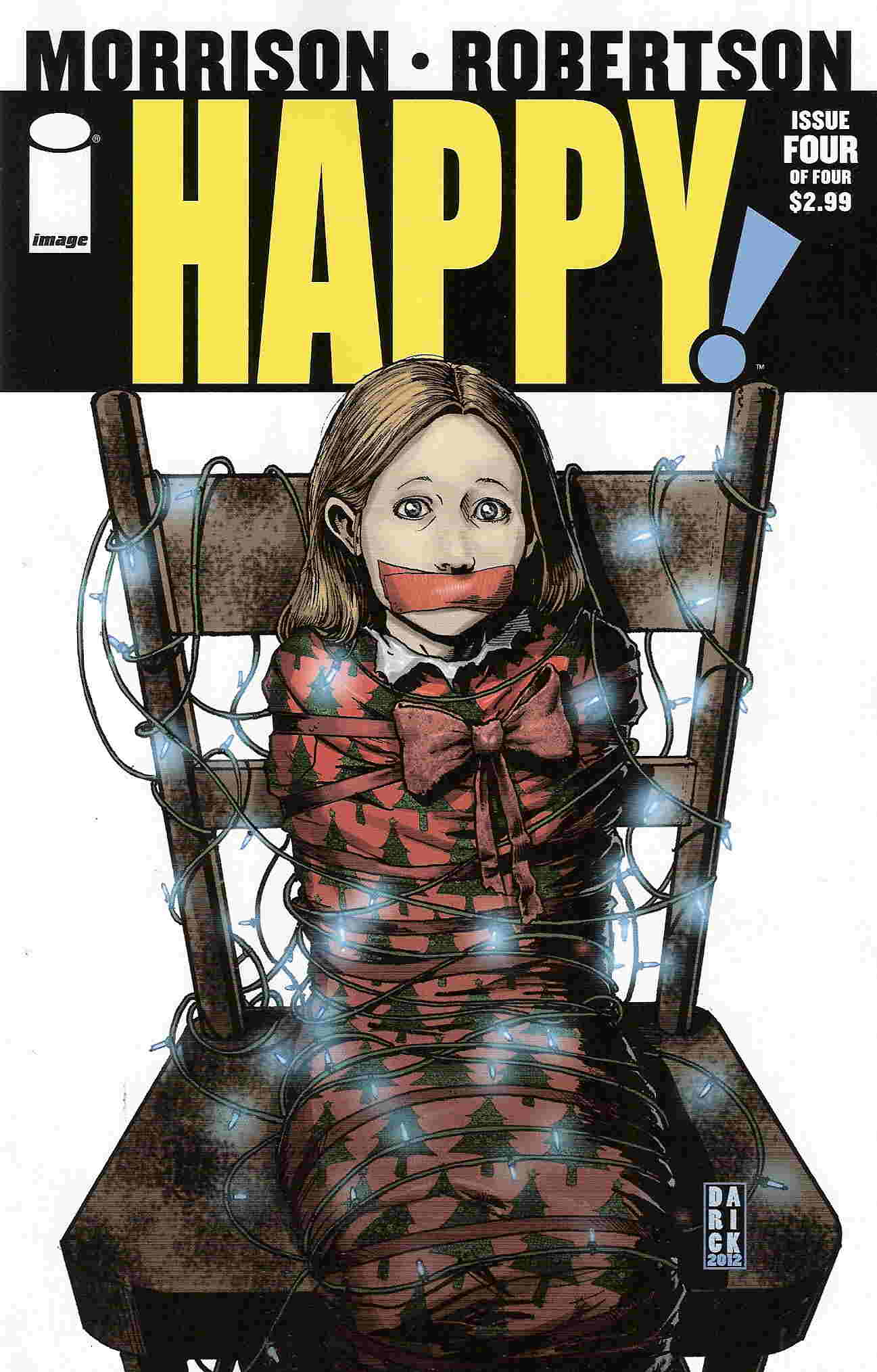 HAPPY! #4:  Grant Morrison’s latest book comes to an end with this issue.  It’s pretty much what you would expect, even from a lunatic like Morrison.  The one thing that puts the conclusion of this insane mini-series over the top and into Cool Shit is the ending, specifically how Nick and Happy end their dealings with Mr. Blue.  It’s been a long time since I’ve seen something that crazy in a comic book.  Or anywhere else, really.  By the way, if this ever gets turned into a movie, I sincerely hope that Tom Sizemore plays Nick.

CROSSED 2013 ANNUAL:  I can’t get enough of the free webcomic that Simon Spurrier is doing for Avatar.  It has one of the most interesting character arcs I’ve seen in a zombie-ish book.  Shaky’s such a bastard, it’s hard to get your head around it, considering how he started out.  Now, Spurrier goes into the history of another excellent character from the webcomic:  Jackson.  Yes, everyone’s favorite psychopath and sheep-shagger.  We finally get some of his history, as to why he’s so crazy . . . or do we?  One way or the other, it’s fun to finally get inside his head and see the world as he sees it.

LOCKE & KEY:  OMEGA #3:  Writer Joe Hill says this issue is the last gasp of air you’ll get; the rest of the series will be a mad rush to the end.  After seeing a few of the things that happen in this book, it’s hard to imagine them as a gasp of air.  Dodge in Bode’s body has set the shadows loose, and they attack Mrs. Locke in a rather sadistic way.  Not only that, but it would seem that they get Duncan and Ty, which leaves Kinsey as the Locke family’s last hope, and she doesn’t look like she’s in any kind of shape to save anyone.  No, she’s too busy going down to party in the cave where her father’s friends all lost their lives so many years ago . . . .  Also, it’s kind of cool to see Hill paying homage to his father in a very CARRIE-ish moment at the prom.  So far as I know, it’s the only time he’s done that, aside from maybe the Dark Tower-type door in HEART-SHAPED BOX.  4 ISSUES TO GO UNTIL THE END!

HELLBLAZER #300:  Well, that’s it.  The show’s over.  If we want to get our John Constantine fix from here on out, we’ll have to do it in CONSTANTINE or JUSTICE LEAGUE DARK.  Not that you’d want to.  No, for all intents and purposes, Constantine’s story is over.  Forgive me if I go on for a bit, but this book meant a lot to me.  When I first got back into comics, it was thanks to my friend, CJ.  He loaned me some PREACHER, HITMAN, and EVIL ERNIE.  HELLBLAZER, however, was the first book I stumbled upon on my own.  I haven’t been around for Constantine’s whole run, but like Jonah Hex, I have every issue he’s ever appeared in, even the stupid issue of DOOM PATROL.  Even the weird MOBFIRE mini-series that probably shouldn’t have included him.  I have been reading this book since 1996, which is longer than I’ve been drinking.  That should tell you something.

So . . . on to the issue itself.  Remember how Constantine returned to Epiphany at the end of #299, seemingly still alive?  Remember how that felt kind of like a cheat?  Guess what:  writer Peter Milligan didn’t mean it.  It was actually a demon pretending to be Constantine to get one final revenge against his wife.  Yet . . . our favorite blue collar mage is actually still around, in ghost form.  Yeah, okay, that’s a cheat, too, but remember, Constantine is a con man more than anything else.  When Delano ended his run on HELLBLAZER, he also ended Constantine’s life for the first time.  He’s died before, most recently at the hands of Brian Azzarello, and he always seems to get out of it by playing games.  Once again, he manages to pull it off with Epiphany’s help.  Yes, he rebuilds his body with some beyond-the-grave sorcery and his ashes.  But is that how Vertigo’s longest running title ends?

Nope.  Here’s where I insist that those of you who haven’t read the final issue go away.  I’m going to talk about the very ending here, and I don’t want to ruin it for you.  Okay?

Now that they’re gone, the rest of us know the answer to that question:  he doesn’t.  Truthfully, I had to read it a few times to make sure I understood what really happened, because it seems kind of innocuous with a strange feeling of uncertainty.

It would seem that Constantine has finally realized that the world would be a better place without him.  Epiphany will eventually be hurt, maybe even killed, because of him.  Same for his newfound nephew.  Same for Gemma.  It’s time to get out of here and make life easier for his loved ones.  So it looks like a suicide on first glance.  But . . . well . . . .

At least, that’s what it seems like.  After he’s closed off all of his relationships, he returns to his niece, his closest blood relative, and he puts his fate in her hands.  Granted, when all things are considered, he never specifically hurt her.  His dark half, on the other hand, raped her at his wedding in #275.  She can’t get around that block in her head, even though she knows it wasn’t really her uncle.  As the ultimate psychoanalysis, Constantine puts a weapon in her hands and lets her decide what to do with him.

Surprise!  She pulls the trigger.  Constantine dies by his niece’s hand, blasted out of existence so hard that all of London feels it.  Even then, the reader is left wondering if this was yet another cheat, if Constantine managed to cheat death yet again.

And then there’s that last page, at the Long Journey’s End pub.  There, we find an wizened Constantine (who, let’s face it, is an old man in his sixties, after all, even though his deal with Nergal maintained a youthful body) in full Dorian Gray mode, clutching his beer, shocked and horrified at what has just happened.  Judging by the look on his face, I can’t help but think that he never thought Gemma would actually do it.

Yes, Constantine conned himself into his own grave, and now he has to suffer for the rest of eternity.  At least, that’s my interpretation.  If you have any other ideas, let me know in the comments below.  The only thing that could have made it perfect: if the people surrounding him at the pub would have been all of his dead friends, the people who trusted him over the years and were betrayed in the end.

Some of you may recall that I hoped Milligan would kill Constantine off to make it harder for the DCU writers to incorporate him into their world.  Then, I said that it probably wouldn’t matter.  Sure enough, I was right on both counts.  The Constantine you see hanging out with Zatanna & Co. is simply not the same guy we know.  No, he is an alternate universe Constantine, close to our anti-hero, but certainly not the same guy.  I take a lot of comfort in that.  I am satisfied with how HELLBLAZER ended.

One more thing:  so . . . I guess this means that Delano’s future HELLBLAZER miniseries, BAD BLOOD, doesn’t happen?  Hm.  Now that I think about it, the future foretold in Neil Gaiman’s THE BOOKS OF MAGIC can’t happen, either.  It’s a shame.  I kind of liked the idea of Timothy Hunter turning on everyone and destroying them all, even John Constantine.  I even liked the idea that Constantine’s archetype, the Fool, survived to the very end of the universe, to tell one of the darkest riddles I’ve ever tried to solve (and failed, because my thoughts aren’t dark enough).  Then again, since the New 52 launched, I guess that’s a moot point.

And another thing:  I’m surprised Constantine’s death didn’t make a bigger splash in the UK.  He was the last surviving member of Mucous Membrane, remember, so in a way, he was a bit of a has-been celebrity.

Sorry, one more thing.  I’m glad to see that one of Constantine’s friends made it through to the end and even survived.  I could have sworn Mike Carey wanted to kill Chas off, but I’m happy to say Chas survived.  He’s the only friend to make it through.  Epiphany and Angie don’t count, because unlike Chas, they weren’t around since issue one.  Everyone else?  They’re gone, and have been gone for quite some time.

My favorite run?  Obviously, it was Garth Ennis’s.  Second?  Delano’s.  After that, it gets a bit harder.  I don’t know how many of you read my comic book reviews in the Elmhurst College LEADER (I’ll wager none of you have, as the only one who would remember is probably not reading this), but when Brian Azzarello first started writing his run, I expressed great doubts.  Most writers find themselves lost in Constantine’s world, but Azzarello seemed like he was trying to bring Constantine into HIS world.  Boy, was I wrong.  After much serious thought, he’s my third favorite run.  The second time I met him, I told him about this, and I apologized to him.  It only seemed fair.  How many other bigmouthed critics do you know that would apologize to someone they talked shit about?  Warren Ellis is a very close fourth, and my top five is rounded out by Milligan, who actually wrote the character into SHADE THE CHANGING MAN back in the old days.  How many of you remember that?

Rest in peace, John Constantine.  I don’t think you will, but I am going to miss you.