WHO THE HELL IS THIS FUCKIN’ GUY? 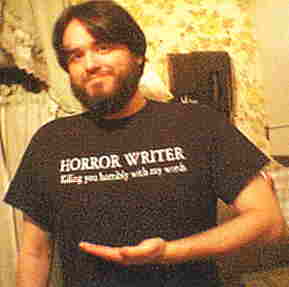 John Bruni was born on July 25, 1978 in Elmhurst, Illinois. He attended local schools from kindergarten all the way through college, where he spent time as a journalist for the Elmhurst College Leader, writing comic book reviews, an occasional feature article, and a series of regular columns as THE STRAIGHT with his Primitive Underbelly partner, Jesse “GonZo” Russell (whose story, “Bear’s Tale, Abridged” appears serialized in all three issues of TABARD INN). He was also the poetry editor of the campus literary/art magazine, MIDDLEWESTERN VOICE, for a whole two weeks, during which time he chose none of the poems that were published.

He has worked several jobs, among them selling ad space for a local newspaper publisher. He was not very good at this (in fact, one might say he was fuckin’ dismal) and was quickly shown the door, but he managed to place a few stories with a couple of their publications (COLLEGE NEWS and CHICAGO COMMUTER) before he left. He also worked selling season tickets for the Drury Lane theater in Oakbrook, which he was much better at, and he toiled away at Sears, selling shoes for almost two miserable years.  He was unjustly fired from the library featured in his “Tales from the Library” columns in issues one and two of TABARD INN. He worked as a teleconference operator and in tech support for about a decade, but the company fired him after they discovered his books. He now works in repair for a telecom company, where he is much happier.

He likes to think he’s a professional writer, and he is getting paid for his work more and more often these days. With two hundred publications to his name, his most recent outing is the novel, AND JESUS CAME BACK, from Rooster Republic. He also has collection of short stories called TALES OF QUESTIONABLE TASTE, published by StrangeHouse Books, who also published his novel, POOR BASTARDS AND RICH FUCKS. His novella, DONG OF FRANKENSTEIN, was published by New Kink. He has a novel, STRIP, which was originally published by Melpomene, the mystery and crime imprint of MUSA. It has been re-released by Riot Forge. His shorter work has also appeared in several anthologies, such as ZOMBIE, ZOMBIE, BRAIN BANG! from StrangeHouse, A HACKED-UP HOLIDAY MASSACRE from Pill Hill, and the critically acclaimed VILE THINGS from Comet Press.  You can also read his work in issues of SHROUD, MORPHEUS TALES, CTHULHU SEX, OVER MY DEAD BODY!, THE REALM BEYOND, TALES OF THE TALISMAN, AOIFE’S KISS, LIQUID IMAGINATION, and a variety of other grand publications.  He is also very proud of his first foray into comic books; thanks to Leo Perez and Jon Lennon of CheeseLord Comics, one of his real life stories was adapted into a one-page strip for the August 2011 issue of PRODUCT OF SOCIETY.

One of his poetry reviews has also been published in the Winter 2006 issue of BIBLIOPHILOS (vol. XII, no. 4), but his contributors copies got lost in the mail, and this issue has sold out. If anyone out there has a copy of this magazine, please get in contact with him at editor@talesofquestionabletaste.com.  He is willing to pay top dollar for it.

Very briefly, he was the editor and publisher of TABARD INN: TALES OF QUESTIONABLE TASTE. He still has boxes and boxes of back issues cluttering up his house. If you’re interested in taking some of them off his hands, he would greatly appreciate it, as he needs the space.

John Bruni is kind of creeped out by writing about himself in the third person, so he’s going to stop now. Besides, the screaming of kidnapped children in his cellar is distracting him . . and he must do something about this immediately.  He can be followed on Twitter @tusitalabruni; on his blog, www.talesofunspeakabletaste.blogspot.com; and he was also a horror movie reviewer at www.forcedviewing.com.  If you are living in the past, you can also find him on MySpace at www.myspace.com/tabardinn, but be warned, he is never there.